An installment of the Student Perspectives blog series

At the top of his commencement speech delivered to the graduating class of Kenyon College in 2005, writer David Foster Wallace proposed a parable: Two young fish are swimming along when they happen by an older fish, who says to them, “Morning boys, how’s the water?” The two fish continue swimming, and eventually one of them asks, “What the hell is water?” The point of the allegory, in Wallace’s words, is that “the most obvious, important realities are often the ones that are hardest to see and talk about.” Our world is dying. The Amazon is on fire, glaciers are melting and releasing record levels of methane into the atmosphere, and our oceans are turning into vats of acid. Yet our culture, entrenched in consumerism, remains willfully ignorant of the water around us.

Climate change is a nebulous, temporal issue: the results of our actions won’t come to fruition for generations to come. How can we lead billions of us monkey-brained humans, who are hard-wired to enjoy the fruits of instant gratification, into a global shift of behavior? One possible answer is not to have the wise older fish educate us on what water is, but rather to leverage our monkey brains psychologically via marketing strategies into sustainable behaviors.

Researchers Katherine White, Rishad Habib, and David J. Hardisty have worked to compile and synthesize the behavioral science literature that relates to facilitating consumer’s behavior in engaging in sustainable behaviors. They published their work in the Journal of Marketing in 2019 under the title “How to SHIFT Consumer Behaviors to be More Sustainable: A Literature Review and Guiding Framework.” They categorized their findings under “five broad psychological routes to encouraging sustainable consumer behavior change”: Social influence, Habit formation, Feelings and cognition, and Tangibility (SHIFT). The researchers suggest that consumers are more likely to engage in pro-environmental behavior when psychologically leveraged by these factors.

Employing the SHIFT framework may not only encourage consumers to engage in pro-environmental behavior; “businesses able to adapt to the demands of our changing world, including the urgent demand for sustainability, will be more likely to thrive in the long term.” In other words, the researchers argue adopting the SHIFT framework and encouraging sustainable behavior is strategic environmentally and economically. Here’s how.

Our behavior is unconsciously dominated by social factors; White, Habib, and Hardesty suggest that “social factors are one of the most influential factors in terms of affecting sustainable consumer behavior change.” For example, men may not engage in environmentally conscious behavior because they associate those actions with feminine traits. On the flip side, if a community leader engages in environmentally conscious behavior, such as installing solar panels on their roof, their community is more likely to follow suit. Additionally, the authors state: “Consumers are more likely to act in a socially desirable manner in public contexts in which people can observe and evaluate their actions.” By utilizing these psychological factors, marketers can leverage consumer behavior to be more environmentally conscious. Tag lines such as “Your neighbors are installing solar panels; are you?” or “Real men recycle” are effective tools to socially leverage consumer behavior to be more sustainable.

Some sustainable behaviors are described as “one-time actions,” such as installing solar panels. However, many other sustainable behaviors require repeated actions, such as taking efficient showers. This idea represents the “habit formation” factor in the SHIFT framework and is one of the most difficult factors to leverage into pro-environmental behavior. This is because many facets of climate change are exacerbated by habits that are deeply entrenched in our culture: driving, resource use, energy use, disposal of products, and more.

The researchers propose several different routes to leverage habit formation into pro-environmental behavior. “Discontinuity to change bad habits” refers to the introduction of roadblocks that make it difficult to engage in environmentally detrimental habits. They introduce the habit discontinuity hypothesis, which suggests that “if the context in which habits arise changes in some way, it becomes difficult to carry out the usual habits that would occur.” This could mean an introduction of tariffs, taxes, or fines on products and activities that are unsustainable. However, this type of negative reinforcement can backfire and trigger a self-defense response in which consumers push back on the roadblocks in their way. Therefore, it is often more effective to introduce positive reinforcement to leverage habit formation into sustainable behavior.

Incentives can increase desired behaviors and positive habit formation. This could mean monetary incentives such as rebates, tiered pricing, rewards, discounts, or gifts. Or, it could mean something as simple as a prompt: a message that appears before the consumer engages in a specific behavior that reminds the consumer what the sustainable behavior is. An example of this is the “number of plastic water bottles saved” counter on the water refilling stations.

The habits that are detrimental to the environment are deeply entrenched in our culture, society, and identity. Therefore, the authors note that an important psychological factor is the individual self: “Individuals desire to maintain positive self-views and can reaffirm the positivity of the self-concept through consumption.” In other words, we monkey-brained humans strive to justify a positive self-view. Thus, when a person discovers their behaviors have a negative environmental impact, a self-defense mechanism is triggered, and they push back to maintain a positive self-view.

A study conducted by P. Sol Hart and Erik C. Nisbet, published in 2011, explores how partisan identity can be so strong that it usurps all logical and scientific reasoning. In their experiment, they exposed 240 adults to “simulated news stories about possible climate change health impacts” and discovered that “the influence of message exposure on support for climate mitigation was contingent upon political partisanship.” That is, the part of their self that identified with their political party took priority over the part that interpreted the dangers of climate change. For this reason, it is important to consider the individual self when communicating climate change impacts. One strategy White, Habib, and Hardesty propose is to buffer against self-threatening information and positively associate pro-environmental behavior with an endorsement of self-values.

Next in the SHIFT framework are feelings and cognition. White, Habib, and Hardesty group these concepts together because consumers tend to employ action driven by either affect or cognition. In other words, consumer behavior is most often dictated by either emotion or logic. The researchers explore negative emotions such as fear, sadness, and guilt as emotional appeals towards climate change communications, and positive emotions such as pride, “warm glow” feelings, and an affinity toward nature. In general, they discovered that appeals to emotion have positive behavioral changes in the short term, but they often dissipate in the long term as they tend to make the consequences feel “uncertain” and “temporally distant.”

While emotional appeals can be affective, it is just as important to present concrete information to the consumer. The authors note that “one is unlikely to engage in more deliberate forms of sustainable behavior change if one is not informed about the problem”. Illustrating why and how the desired behavior is sustainable is necessary to combat misinformation and motivate long-term behavioral change. This can be employed via “eco-labeling”: labeling products with “attention grabbing, easily understandable, and consistent” taglines that promote sustainable behaviors and products. Additionally, the researchers propose framing the information in the most affective way. They state that “consumers care more about future losses than about future gains” and therefore the information should be framed under potential losses, such as energy costs, as opposed to potential gains, such as energy savings.

The final strategy is appealing to the concept of tangibility. Climate change is a temporal problem, and the outcomes of sustainable behavior are abstract—unrelated to the self. Furthermore, environmental outcomes are difficult to measure and slow in nature, which makes the problem feel far off. A way to circumvent this unique issue is to localize the impacts of sustainable behavior, reducing the immediate consequences to a given city, neighborhood, or region. This will make the issue more personalized and motivate the consumer to engage in sustainable behavior. Another method to make climate change more tangible is to emphasize personal experiences with the impacts. This could mean referencing personalized issues, such as extreme weather events, the amount of litter on your street, or the cost of gas.

[Climate change] is such a large and complex issue that it needs to be tackled from multiple angles – political, business, individual consumers, etc.

Katherine White, lead author of “How to SHIFT Consumer Behaviors to Be More Sustainable: A Literature Review and Guiding Framework”

Individual behavior is just one facet of the monumental crisis of climate change, is a global shift in behavior ultimately going to make a difference? I asked Katherine White, one of the authors of “SHIFT,” to comment on the role of individual behavior versus the factors that are out of the average person’s control. She stated, “This is such a large and complex issue that it needs to be tackled from multiple angles – political, business, individual consumers, etc.” Furthermore, I asked to what role do marketers have in the fight against climate change? Katherine White argued that marketers and business “should consider the consequences of what types of behaviors they are encouraging” and they should promote “products with more circular lifecycles.” While individual behavior is only a part of the issue, it is necessary that marketers, business owners, and consumers take responsibility to promote positive sustainability.

So, what’s the end to the fish story? Do the fish continue to live out their days completely ignorant of the water? Probably. It is impossible to be fully conscious of the water 100% of the time, even if you are peripherally aware of it. The sad truth is that our behavior is not always driven by rationality; it is inevitable that we will fall back on our monkey-brained default setting. This is why we need to be checked and leveraged psychologically as consumers. It is simply too easy to buy a cup of coffee instead of making it at home, or to drive instead of taking the train, or to take a long shower, etc. However, this also means that it is possible to make it just as easy to do the opposite and engage in sustainable behavior; it just has to be encouraged and psychologically leveraged by policies, positive business practices, and society. 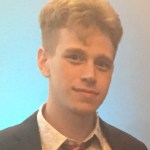 Sam Stone is a senior majoring in English at DePaul University, Chicago.