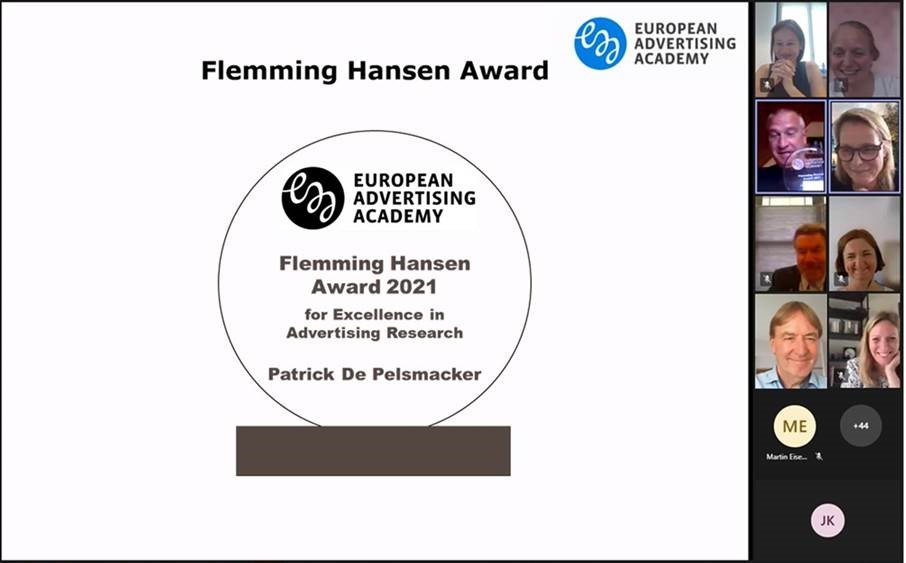 The jury for choosing the recipient of the Flemming Hansen 2021 award included three past presidents of the EAA: Edith Smit (Amsterdam School of Communication Research, Jury President), Peter Neijens (Emeritus Professor in Amsterdam School of Communication Research), and Ralf Terlutter (University of Klagenfurt), along with the current Editor in Chief of International Journal of Advertising, Charles Raymond (Ray) Taylor (Villanova University of Business). Several outstanding candidates were nominated for consideration by the jury; after careful deliberation, these distinguished judges selected De Pelsmacker independently and unanimously.

In announcing the award, Jury President Edith Smit explained, “As a jury, we mutually agreed that all nominees and nominations were of very high quality, which made our task very difficult. On the other hand, we all agreed about the number one, which made it easy to select the win

ner. We were impressed by his impact to the field of advertising by means of his publications, citations, mentorship, and his part in the establishment of the EAA group. He is, in short, extremely visible to the advertising world.” 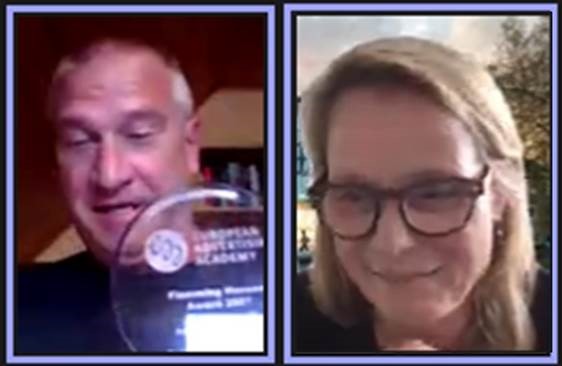 With regard to his influential contributions to advertising research in the past 30 years, De Pelsmacker has published 148 international peer-reviewed articles, along with 10 widely cited books (more than 16,000 citations, according to Google Scholar). These numbers also continue to increase, because De Pelsmacker remains a very active scholar, with 49 articles published just in the past 5 years (Web of Science). His innovative research also is enormously versatile and often exerts a high degree of societal impact. For example, his research on responsible consumer behavior and fair-trade marketing, which dates back to 2005, produced an early contribution to this research field (“Do consumers care about ethics? Willingness to pay for fair‐trade coffee”) that has been cited more than 1,600 times thus far.

Beyond providing outstanding academic research on his own, De Pelsmacker has helped advance the advertising discipline by serving as a journal editor and reviewer, while also engaging closely with and inspiring numerous doctoral students as an advisor and mentor. As a truly international scholar, his global network of co-authors includes scholars from Croatia, Denmark, Germany, Iran, New Zealand, and the United Kingdom. Furthermore, he actively and generously seeks to help young researchers build their own networks and careers. Throughout his academic career, De Pelsmacker has been honored with various prizes and nominations; notably, he was the first European to receive the Ivan L. Preston Outstanding Contribution to Research Award of the American Academy of Advertising, in 2019.

The EAA congratulates Patrick de Pelsmacker and thanks all the nominators for their excellent suggestions.

About Flemming Hansen: Flemming Hansen was a marketing research and marketing communications scholar from Denmark, successful and influential in both business and academia. He was a prolific professor at the Copenhagen Business School. In 2002, Hansen initiated ICORIA by hosting an initial, and relatively small, conference in Copenhagen. He also was among the founders of the EAA in 2005 and served as its first president. Following his death in 2010, the EAA decided to name its biannual award after this distinguished and influential contributor to the field.